The young boy, way too thin for his age, stares down the long railroad tracks covered in undisturbed ice and snow, wondering aloud, “Will this really be how it all ends? Will I be just another body lying frozen in the snow like the others I saw in the streets on the way here? Will anybody ever know what happened to me? Will my mother or father ever know . . . if they are even alive?”

The astonishing and inspiring true story of a young Dutch boy’s survival during World War II, One Step Ahead traces his remarkable survival. This harrowing tale, as told to Barbara Harwood by Jack Prins, begins with six-year-old Jack watching the bombing of the ship Statendam in the harbor across from the apartment where he has been placed with virtual strangers.

Facing certain death around every corner, Jack miraculously manages to survive the invasion and occupation of Nazi fanatics bent on murdering every Jewish child in Europe. From his remarkable tale of deprivation, hunger, and courage, through his teen-age years in an orphanage, and on to his journeys to Israel and eventually America, Jack’s sense-of-humor and resilience remain intact, making his story a reader’s delight.

Until recently, Jack Prins was a resident of Ajijic, Jalisco, Mexico where he wrote his book. He has now returned to Austin, Texas. Additional information is available at his web address below.

While introducing Zwartboek at the 7th Annual Ajijic Jewish Film Festival in January, local resident Jack Prins mentioned his book One Step Ahead - a child's story of daring and bravery during the Holocaust. This memoir will be of interest to the Dutch, Jews, and Germans living at Lakeside, as well as to so many others who were impacted by the events of WWII. One Step Ahead might never have seen the light of day had it not been for the encouragement and support of friend and co-author Barbara Harwood, otherwise known as Pia Aitken, who passed away shortly after the book was published.

Jack Prins was born in the Netherlands in 1933, a Jewish boy in a country soon to be invaded by Germans. When Jack is six we see events unfold through the eyes of a six year old and when he is ten we see his life through the eyes of a ten year old and so on. We share his relationship with his parents, one of whom did not survive the Holocaust. We tour the Netherlands with Jack as he flees from hiding place to hiding place. After the war, we travel with him to the new state of Israel. There is a refreshing honesty and Dutch bluntness in Jack’s storytelling as when, after at least eight brushes with death, he identifies the primary reason why he was one of the survivors: luck.

Added to the story from time to time is historical information later gained through research. There were 140,000 Jews living in Holland before the war and only 20,000 by its end. At times I would have liked a bit more history, particularly about the Dutch Nazis, a term I was not familiar with. But this is Jack’s personal story, not a history text.

Only occasionally, Jack links his early years to later events in his adult life. I wish he had done this more often, as I was left with unanswered questions. How did his post-traumatic stress syndrome manifest in his adult life? How did it impact his first marriage, which ended in divorce? How did it impact his relationship with his children? But Jack Prins did more than just survive. He thrived. He continues his story on his website www.jackprins.com where he describes his life in America and his successful career. We can appreciate that telling his story in considerable detail was not easy for him, but it did prove to be therapeutic. At first Jack Prins said no, he could not do it, too painful. But he could and did. It took Jack and Barbara three years of tears and laughter to complete the project. As his co-author describes in her epilogue, afterwards Jack’s nightmares finally stopped. Storytelling is a healing experience. In addition, a compelling memoir can illuminate an historical period like nothing else because it relates events in the voice of a witness.

I knew immediately that I wanted to read this book because of how the story connects to my own life. My parents lived near Rotterdam during WWII and moved to Canada in 1954. As a boy growing up in Nova Scotia, I almost never heard stories about their lives in the old country during those dark years. Only as an adult did I gain enough knowledge to awaken a desire in me to delve into their story. Jack’s book was helpful in filling that void at least a little bit. 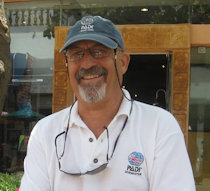 One Step Ahead: A child's story of daring and bravery during the holocaust.

The gripping and authentic story of a young Dutch Jewish boy, the narrator himself, in fact, who manages by his own wit and with some luck to escape the fate of most Dutch Jews. Holland was the country, occupied by Nazi Germany, with the lowest survival rate of Jews at only 30%, while in neighbouring Belgium more than 60% survived. A couple of the contributing factor were a network of Dutch collaborators and a strict and accurate registration system that the Nazis had established in Holland. One of the many engaging factors of this narrative is that the author despite his harsh fate does not fall victim to self-pity, but rather frequently shows a healthy sense of humour. The author/ protagonist eventually gets out of Holland and to Israel. Jack Prins now lives in Mexico.