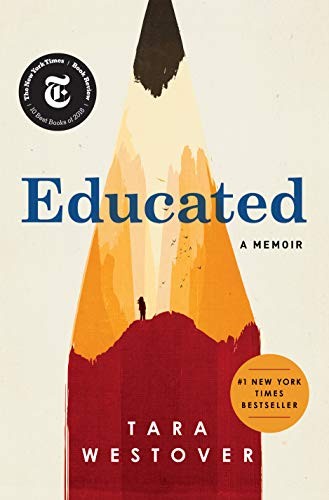 Born to survivalists in the mountains of Idaho, Tara Westover was seventeen the first time she set foot in a classroom. Her family was so isolated from mainstream society that there was no one to ensure the children received an education, and no one to intervene when one of Tara’s older brothers became violent. When another brother got himself into college, Tara decided to try a new kind of life. Her quest for knowledge transformed her, taking her over oceans and across continents, to Harvard and to Cambridge University. Only then would she wonder if she’d traveled too far, if there was still a way home.

Tara Westover is an American author. Born in Idaho to a father opposed to public education, she never attended school. She spent her days working in her father's junkyard or stewing herbs for her mother, a self-taught herbalist and midwife. She was seventeen the first time she set foot in a classroom. After that first encounter with education, she pursued learning for a decade, graduating magna cum laude from Brigham Young University in 2008 and subsequently winning a Gates Cambridge Scholarship. She earned an MPhil from Trinity College, Cambridge in 2009, and in 2010 was a visiting fellow at Harvard University. She returned to Cambridge, where she was awarded a PhD in history in 2014.

As I write, Educated by Tara Westover has been on The New York Times Hardcover Nonfiction Best Sellers list for 63 weeks and is currently ranked number 2. The book has earned numerous awards and much recognition for Westover. She was listed on the TIME 100 MOST INFLUENTIAL PEOPLE 2019.

“Educated is even better than you’ve heard” wrote Bill Gates about one of his five favorite books of 2018 and I agree.

Educated is even better than you’ve heard

Although Tara Westover’s life and my life are very different, reading this book was a deeply personal experience for me. It triggered thoughts of my relationship with my father, but he was not much like Gene Westover. It also stimulated thoughts about my own twenty-five year entrapment in a benign cult.

Her experience is an extreme version of something everyone goes through with their parents. At some point in your childhood, you go from thinking they know everything to seeing them as adults with limitations.

Westover struggled mightily to free herself from the influence of her father and her upbringing. But I cannot ever remember a time when I thought my father knew very much. By age 15 I had successfully rebelled against my father and at age 17 I left home, as did Westover at the same age. I have never regretted either decision but another force held me in its grip until midlife. Westover progressed much further and much faster after she asserted her independence than I did.

I enjoyed Oprah Winfrey’s interview of Tara Westover whose writing I found more powerful than her speaking.

In a special conversation, Oprah sits down with author Tara Westover.

Gene and Faye Westover were True Believers, people with almost no doubts.

Dad gaped at me in disbelief, then he began to testify— not about God, but about Mother. The herbs, he said, were a divine calling from the Lord. Everything that happened to our family, every injury, every near death, was because we had been chosen, we were special. God had orchestrated all of it so we could denounce the Medical Establishment and testify of His power.

At age eighteen I was fully independent from my family and, believing I was free, I promptly joined a benign cult. I stayed for twenty-five years. I know the mind of a True Believer because I was one. I had little doubt that I was one of God’s chosen few.

The Days of Abomination of the Westovers were familiar to me except that we called them the Great Tribulation. Unlike them, we were not survivalists but we believed we would be protected from the chaos caused by the collapse of civilization. We would be led to a Place of Safety located at Petra, Jordan. We would need to be close to Jerusalem to await the arrival of the Second Coming of Jesus Christ. Yes, I once truly believed that!

Like the Westovers, we trusted God for healing and we were suspicious of the medical profession. I once was prayed over by a pastor and anointed with oil. That prayer was not answered. I still remember the relief I felt when, well into my thirties, I took my first aspirin for a headache.

Recently Tara Westover gave the commencement address at Northwestern. I found her comments about self very interesting. At less than half my age, Westover has insights that are recent discoveries for me.

...sometimes I think that when we deny what is worst about ourselves, we also deny what is best. We repress our ignorance, and thus we deny our capacity to learn. We repress our faults, and thus we deny our capacity to change. We forget that it is our flawed human self, and not our avatar, who creates things and reconsiders and forgives and shows mercy.

...sharing a self is not the same thing as having a self.

In the Author’s Note after the final chapter, Westover writes,

This story is not about Mormonism. Neither is it about any other form of religious belief. In it there are many types of people, some believers, some not; some kind, some not.

She is only partly correct. Yes, this story is first and foremost her personal journey. But it is about religion even if she doesn't want it to be. Most people practice their religion harmlessly. But at the extremes much harm is done and her story testifies to this fact. Very difficult issues emerge when restrictions must be imposed on religious freedom by society.

There is ongoing controversy.

'Educated' should be read with grain of salt, says family's attorney

With some quick research I found the Westover family business, Butterfly Expressions, which sells essential oils and offers courses.

Like many others, I am interested in what Tara Westover will do next. Given the success of Educated, she has many options. Whatever she chooses, I hope it will be as a builder of bridges between some of the great divides in America.

“EDUCATED” AUTHOR TARA WESTOVER TALKS ABOUT HER NEXT CHAPTER

The crisis that I have chosen to engage with this year is the kind of splitting happening –especially in the US, but here too— of the body politik into two worlds. We are just so separate, we cannot even talk to each other. I think it is largely an urban/rural divide— some say it is a right/left divide— but I think those things often line up. Rural kids really struggle going to university. They enroll in lower numbers and drop out in higher numbers and even when they graduate it takes them on average twice as long, eight years to do four years.