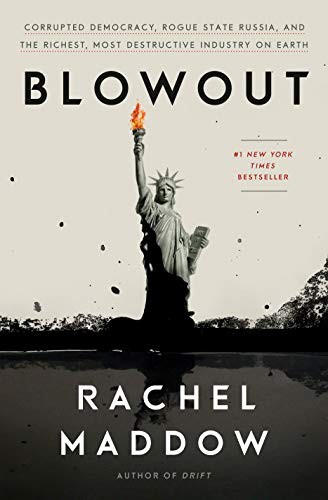 In 2010, the words “earthquake swarm” entered the lexicon in Oklahoma. That same year, a trove of Michael Jackson memorabilia—including his iconic crystal-encrusted white glove—was sold at auction for over $1 million to a guy who was, officially, just the lowly forestry minister of the tiny nation of Equatorial Guinea. And in 2014, Ukrainian revolutionaries raided the palace of their ousted president and found a zoo of peacocks, gilded toilets, and a floating restaurant modeled after a Spanish galleon. Unlikely as it might seem, there is a thread connecting these events, and Rachel Maddow follows it to its crooked source: the unimaginably lucrative and equally corrupting oil and gas industry.

With her trademark black humor, Maddow takes us on a switchback journey around the globe, revealing the greed and incompetence of Big Oil and Gas along the way, and drawing a surprising conclusion about why the Russian government hacked the 2016 U.S. election. She deftly shows how Russia’s rich reserves of crude have, paradoxically, stunted its growth, forcing Putin to maintain his power by spreading Russia’s rot into its rivals, its neighbors, the West’s most important alliances, and the United States. Chevron, BP, and a host of other industry players get their star turn, most notably ExxonMobil and the deceptively well-behaved Rex Tillerson. The oil and gas industry has weakened democracies in developed and developing countries, fouled oceans and rivers, and propped up authoritarian thieves and killers. But being outraged at it is, according to Maddow, “like being indignant when a lion takes down and eats a gazelle. You can’t really blame the lion. It’s in her nature.”

Blowout is a call to contain the lion: to stop subsidizing the wealthiest businesses on earth, to fight for transparency, and to check the influence of the world’s most destructive industry and its enablers. The stakes have never been higher. As Maddow writes, “Democracy either wins this one or disappears.”

Maddow holds a bachelor's degree in public policy from Stanford University and a doctorate in political science from Oxford University and is the first openly lesbian anchor to host a major prime-time news program in the United States. Asked about her political views by the Valley Advocate, Maddow replied, "I'm undoubtedly a liberal, which means that I'm in almost total agreement with the Eisenhower-era Republican party platform."

Blowout: Corrupted Democracy, Rogue State Russia, and the Richest, Most Destructive Industry on Earth by Rachel Maddow is a book that I would not have read were it not a selection of the Ajijic Book Club. As I write this review, the book has been on The New York Times Best Sellers List for 11 weeks. Yet without being clear in my own mind as to why, I began reading Blowout with low expectations.

However, I enjoyed this book from the start and it proved to be much more than an exposé. Maddow is a good storyteller and she had interesting content to work with. I liked her writing style and I enjoyed her mild sarcasm. A caustic attack on the oil and gas industry did not materialize. Her knowledge of geopolitics impressed me.

Some of the information in Chapter Two, the use in 1969 of nuclear power for fracking shale, came as a complete surprise to me.

Project Rulison fell under a specialized subset of the Atoms for Peace program, a bold attempt to harness the power of atomic bombs for industrial purposes… The bomb was exploded 8,426 feet beneath the earth’s surface, where it vaporized enough rock to open a 300-foot-high, 152-foot-wide cavern… In 1973, the AEC tried again in Colorado, in Project Rio Blanco, where this time it was three thirty-three-kiloton nuclear bombs, detonated simultaneously, at three separate depths within 851 feet of one another.

I enjoy spectator sports including the NBA. I found the story of the Oklahoma City Thunder interesting as I had watched them play on TV and I remembered their star, Kevin Durant. But I did not know any of the background and connections to the oil and gas industry.

Rex Tillerson is a character that I watched come and go as Secretary of State in the Trump Administration. I am not a fan of most senior corporate executives who become government officials. And Maddow writes quite a sentence about Tillerson.

His favorite book, Tillerson had told the readers of Scouting magazine, was Ayn Rand’s Atlas Shrugged, that bible of bright, contrarian high school sophomores and adult free-market zealots, in which slug-brained bureaucrats and politicians are the obstacles blocking the exalted few individuals of drive and genius who are the only real heroes who can be counted on to power world progress, if they could only be allowed to operate unfettered by the small, the meek, the uninformed, the uncertain.

The story of the Deepwater Horizon explosion and oil spill of 2010 is still a memory that I can easily recover. But in Chapter Twenty-eight  Maddow shares a story that I have no memory of ever hearing about. I went to Wikipedia to confirm the story and learn a bit more about the Taylor oil spill.

Consider also this remarkable fact: the Deepwater Horizon is about to lose its place as the largest known oil spill in U.S. history— to another spill in the Gulf of Mexico. Turns out an oil rig toppled by Hurricane Ivan in 2004 has been leaking, twelve miles off the coast of Louisiana, every day since then.

The story of Teodorin Nguema Obiang Mangue and Equatorial Guinea which begins in Chapter Eight was also something I was unfamiliar with.

In Chapter Ten Maddow again displays her storytelling skill as she begins the story of the Murphys so innocently.

The Murphys seemed like something of a cliché in the New York suburbs: solidly middle-class, middle-aged professionals willing to give up the easier commute for an extra bedroom or two, a real yard, and, of course, the promise of good schools for their two young daughters.

I also found learning about the rise in Oklahoma earthquakes through the life of Austin Holland an interesting approach. I have no memory of a record-breaking earthquake in Prague, Oklahoma in 2011. Today I googled Prague, Oklahoma and quickly found a December 2, 2019 story from The Associated Press: The U.S. Geological Survey has reported a magnitude 3.8 earthquake in Oklahoma near Prague, where a magnitude 5.7 quake struck just more than eight years ago.

The intertwined story of Aubrey McClendon, Chesapeake Energy and the Oklahoma City Thunder in one of the main threads of the book. There was no hint which prepared me for the shock that came in the first paragraph of Chapter Twenty-eight. The events unfolded early in 2016.

As much as I gained admiration for Rachel Maddow as a storyteller, I was disappointed by the final chapter of her book. For the first twenty-eight chapters she vividly describes problems, very serious concerns. Near the end of the book she becomes more analytical.

The oil and gas industry— left to its own devices— will mindlessly follow its own nature. It will make tons of money. It will corrode and corrupt and sabotage democratic governance. It will screw up and— in the end— fatally injure the whole freaking planet. And yes, it will also provide oil and gas along the way! And jobs for the workers who produce those things for it. The end-times battle that we’re engaged in now is to figure out how to get along without oil and gas— and we’re plugging away but still a ways off from that— and, in the meantime, commit to a whole new level of constraint and regulatory protection against this singularly destructive industry to minimize its potential harms.

A whole new level of constraint and regulatory protection? Are you kidding me? It gets worse.

Containment is the small-c conservative answer to the problem at hand— democratically supported, government-enforced active and aggressive containment...Democracy either wins this one or disappears. It oughtta be a blowout.

I browsed Maddow’s Notes on Sources. Clearly, the story she tells is supported by extensive research. It must take tremendous effort to write a book like this, an effort I very much appreciate.

One of her sources was the book The New Tsar: The Rise and Reign of Vladimir Putin by Steven Lee Myers which was the ABC book selection for February, 2019.