Slime: How Algae Created Us, Plague Us, and Just Might Save Us 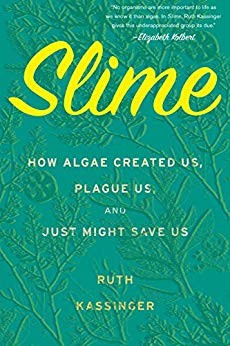 Say “algae” and most people think of pond scum. What they don’t know is that without algae, none of us would exist.

There are as many algae on Earth as stars in the universe, and they have been essential to life on our planet for eons. Algae created the Earth we know today, with its oxygen-rich atmosphere, abundant oceans, and coral reefs. Crude oil is made of dead algae, and algae are the ancestors of all plants. Today, seaweed production is a multi-billion dollar industry, with algae hard at work to make your sushi, chocolate milk, beer, paint, toothpaste, shampoo and so much more.

In Slime we’ll meet the algae innovators working toward a sustainable future: from seaweed farmers in South Korea, to scientists using it to clean the dead zones in our waterways, to the entrepreneurs fighting to bring algae fuel and plastics to market.

With a multitude of lively, surprising science and history, Ruth Kassinger takes readers on an around-the-world, behind-the-scenes, and into-the-kitchen tour. Whether you thought algae was just the gunk in your fish tank or you eat seaweed with your oatmeal, Slime will delight and amaze with its stories of the good, the bad, and the up-and-coming.

Ruth Kassinger’s writing focuses on the intersection of science, history, and business.

Ruth is also the award-winning author of eight science and history books for young adults. In addition, her science and health writing has appeared in the Washington Post, Chicago Tribune, National Geographic Explorer, Health magazine, Science Weekly, and other publications. She speaks regularly at conferences, bookstores, and with book groups via video call.

Ruth grew up Baltimore, and received a B.A. degree from Yale University and a Master’s degree from Johns Hopkins University. She and her husband live in suburban Maryland

Ruth Kassinger’s enthusiasm for her chosen subject,  Slime: How Algae Created Us, Plague Us, and Just Might Save Us, is obvious throughout her book. Imagine someone getting excited about algae. But it did make her book enjoyable to read.

My fascination became this book. It is the story of my journey— by phone, plane, car, boat, drone, and scuba fins, across the US and around the globe from Canada to Wales to South Korea— to understand how algae, the most powerful organisms on the planet, influence our lives, for better and for worse, and what role they will play in our future.

Kassinger begins her story at the very beginning, “3.7 billion years ago, about 750 million years after the planet coalesced from cosmic dust.” She takes us on a long journey of transformation that gave us our beautiful blue home. Algae played a significant role and as the world changed the algae evolved.

Of the four sections in the book, Section I, In the Beginning, the long history of the earth, was my favorite.

Section II, Glorious Food, was my least favorite as I am not a foodie. But I did appreciate learning about EQ. Again, our deep past is interesting.

...a measurement called the Encephalization Quotient or EQ, which is the ratio of brain size to body size...

The latter’s direct descendants in the Rift Valley, Homo habilis (the earliest members of the Homo genus who lived roughly 2.4 million years ago), had an EQ of 57. Homo erectus lived from about 1.9 million years to 150,000 years ago, and individuals who lived at the end of that period had EQs of 63.

But, when— and where— did Homo sapiens with fully modern, EQ 100 brains evolve? It certainly must have happened at a time and place where algae-concentrated DHA and iodine were on the menu. In other words, along the shore and, most likely, along the ocean shore.

Section III, Practical Matters, details current uses of algae. These range from feedstock for plants and animals,  an emulsifier, a salad ingredient, a source of energy and more. I was impressed by the depth and breadth of  Kassinger’s knowledge and, again, her enthusiasm for all things algae.

I felt uneasy reading Section IV, Algae and the Changing Climate. Some members of the Ajijic Book Club had expressed an interest in lighter topics, a desire to avoid doom and gloom, no heavy stuff. Section IV did not meet those expectations.

In the Epilogue, Kassinger writes,

It’s easy to feel depressed, even defeated, by the continuing and seemingly unstoppable degradation of our environment.

Her conclusion does not encourage me.

There will be no single, quick fix to our intertwined environmental crises, and it will take many small measures that have a significant effect in the aggregate. A 10 percent reduction in carbon dioxide emissions here; a 15 percent reduction in methane emissions there; a 5 percent drawdown of atmospheric carbon in the future— pretty soon you’re talking about real environmental relief.

I struggled to finish reading this book but for a reason unrelated to it. I was reading Section II when the coronavirus crisis hit, completely diverting my attention. Perhaps for a time my range of interest will be more narrow, or perhaps not.

I knew very little about algae before reading this book.  I did not know that seaweed was macroalgae. I did have some knowledge about the potential of algae as a source of energy.

We had a pond on our farm. But I remember the water being mostly clear as it was fed by a small stream. Only when the stream dried up during a hot summer did the pond turn green with algae.

I would fail if tested on this,  but I found this very interesting.

The possible impact of seaweed on  Japanese life expectancy is interesting. Even so, no I will not be eating more seaweed. But I do eat flaxseed as a source of Omega-3.

Learning this about the Aztecs was interesting but I do not eat spirulina. Generally, I do not eat dietary supplements as I do not seem to need them. Fortunately, after my last medical examination, my doctor informed me that I was in very good health for my age.

I do not know enough about this to answer the question.

Ethanol from corn as a source of energy is a whole other story deserving a book of its own.

I think I have seen ads for Thrive on TV, sounds familiar.

I appreciated the knowledge but I try not to react emotionally.

No. I am skeptical and I am concerned about negative unintended consequences. Sometimes solutions to one problem are the source of a new, very different problem.

I think the author’s scenario is, unfortunately, a reasonable possibility.

The last sentence of the Epilogue reads “Algae: They created us, sustain us, and, if we’re both clever and wise, they can help save us.” Homo Sapiens are indeed clever. But I doubt that we are wise.