The Last Nomad: Coming of Age in the Somali Desert 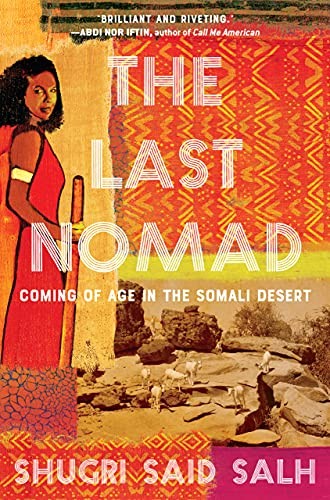 Born in Somalia, a spare daughter in a large family, Shugri Said Salh was sent at age six to live with her nomadic grandmother in the desert. The last of her family to learn this once-common way of life, Salh found herself chasing warthogs, climbing termite hills, herding goats, and moving constantly in search of water and grazing lands with her nomadic family. For Salh, though the desert was a harsh place threatened by drought, predators, and enemy clans, it also held beauty, innovation, centuries of tradition, and a way for a young Sufi girl to learn courage and independence from a fearless group of relatives. Salh grew to love the freedom of roaming with her animals and the powerful feeling of community found in nomadic rituals and the oral storytelling of her ancestors.

As she came of age, though, both she and her beloved Somalia were forced to confront change, violence, and instability. Salh writes with engaging frankness and a fierce feminism of trying to break free of the patriarchal beliefs of her culture, of her forced female genital mutilation, of the loss of her mother, and of her growing need for independence. Taken from the desert by her strict father and then displaced along with millions of others by the Somali Civil War, Salh fled first to a refugee camp on the Kenyan border and ultimately to North America to learn yet another way of life.

Readers will fall in love with Salh on the page as she tells her inspiring story about leaving Africa, learning English, finding love, and embracing a new horizon for herself and her family. Honest and tender, The Last Nomad is a riveting coming-of-age story of resilience, survival, and the shifting definitions of home. 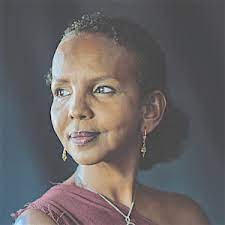 Shugri Said Salh was born in the Somali desert. In 1992, she immigrated to North America after civil war broke out in her home country. She attended nursing school at Pacific Union College and graduated with honors. Although this is her first book, Salh has been storytelling since she could talk. From her grandmother and the nomadic community in which she was raised, she heard stories and learned of their power to entertain, teach, and transform. When she isn't writing or telling stories, she works as an infusion nurse. She lives in Sonoma County with her husband and three children.

Just as I was ready to begin reading the March book selection, Russia invaded Ukraine. That event captured my attention and determined my reading material for the next couple of weeks. When I eventually started reading The Last Nomad: Coming of Age in the Somali Desert by Shugri Said Salh, I wondered if it would hold my interest. It did. The book is a window into a very different life lived in a very different country.

Some advocates assert that we should have respect for all countries and all cultures. However, after reading The Last Nomad I have no such feelings toward Somalia. The country needs a complete overhaul from bottom to top.

There is much ugliness in this book but, fortunately, there are also two beautiful themes. The relationship between Shugri Said Salh and her grandmother, Ayeeyo, “the strongest woman I have ever known”, is inspiring and constitutes the narrative arc of the book. And Salh’s love for the food of Somalia and elsewhere adds some much needed flavor.

Shugri Said Salh loves telling stories but this book is her first. Considering that English is not her native language, I was impressed with her descriptive writing and storytelling skills. They are better than mine.

The lives of nomads in the Somalia desert are extremely difficult. It amounts to little more than a struggle for bare survival. I could find no information on the current number of nomads in Somalia.

The first eighteen years of the life of Shugri Said Salh were very difficult. Sometimes she lived as a nomad with her grandmother. Sometimes she lived with her family and experienced the brutality of her father. In her later teens she lived in an orphanage. But we know the story has a happy ending as she hints from time to time about now living a good life in California.

Chapter 4, Carrying Out Tradition, is tragic and graphic.

In Somalia, the clitoris is blamed for all humanity’s troubles— the root of all evil, so to speak. In FGM type II, both the clitoris and the labia minora are removed, and sometimes the labia majora. FGM type III is the most drastic type of genital mutilation and is the standard procedure done to young girls in my country. Sadly, Somalia has the distinction of having a higher rate of type III FGM than any other country in the world.

This is not a culture worth preserving.

On January 16, our whole family, numbering 250 and including screaming children, moaning elders, and young men and women alike, left Mogadishu in a caravan of cars, pickups, and open cargo trucks. That day, America, led by President George H. W. Bush, began bombing Iraq, an assault known as Operation Desert Storm. That event meant most of the world never knew of our suffering.

Yes, that was me in 1991, following the war in the Middle East. I was probably unaware of the civil war in Somalia. But as a self-defense I will note that the aggregate human suffering always exceeds the human capacity to bear it.

Salh left Somalia in 1992 and emigrated to Canada in the aftermath of a civil war. The country she describes is very tribal. Added to the mix was the growth of an extreme version of Islam.

In the Epilogue the author describes herself and her approach to life. She is a remarkable woman, a survivor. But she is also one of the lucky ones who was privileged enough to get out of Somalia.

Survival is woven into the fabric of who I am. I never ask, “Why did this happen to me?” but rather, “How can I overcome this situation?” It is easy to let past trauma or injustices rule your life forever, but I want to be free, so I needed to understand and forgive others. I know that my father was a product of his time and circumstance. When I think of my father today, I think of a man who took a stand by educating his daughters when other people thought it was not important. But above all, I keep in mind that my happiness is up to me now, not my father. I am very proud of my ancestors, my home country, and my past. I have just learned to leave out the parts that don’t serve me as a woman, a mother, a human.

Today Somalia is in the grip of its worst drought in forty years. Millions are at risk of starvation. And I must live with the fact that I am more motivated to help the people of Ukraine than the people of Somalia.

Each Chapter of The Last Nomad begins with a Somalian proverb.

Alongside with me, mother gave birth to an indomitable will.

Of both man and an unknown forest, anything is to be expected.

Only a mother is indispensable.

Men still blame Eve for everything.

One must surrender to the inevitable.

A centipede does not limp for losing a single leg.

Be a mountain yourself; or lean on something like it.

Don’t ever dig a treacherous hole in the ground; and if you do, do not make it a bottomless pit, for you might just end up in it.

As each elephant can easily spot the flea on another elephant’s back, so some men can only find fault with others but not with themselves.

Oh lord! How sad is the soul that leaves its native land.

Necessity is an inescapable knot.

If you happen to find yourself in a strange land where everybody in the country has somehow lost the use of a single eye, then it’s likewise prudent to lose one of your eyes.