Gut: The Inside Story of Our Body's Most Underrated Organ 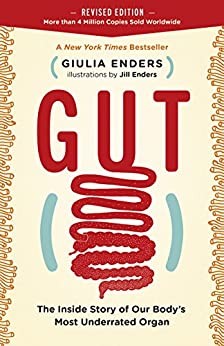 With quirky charm, science star and medical doctor Giulia Enders explains the gut’s magic, answering questions like: What’s really up with gluten and lactose intolerance? How does the gut affect obesity? What's the connection between our microbiome and mental health? Why does acid reflux happen? In this revised edition of her beloved bestseller, Enders includes a new section on the brain-gut connection, and dives into groundbreaking discoveries of psychobiotics—microbes with psychological effects that can influence mental health conditions like depression and even stress.

For too long, the gut has been the body’s most ignored and least appreciated organ. But it does more than just dirty work; it’s at the core of who we are, and this beguiling book will make you finally listen to those butterflies in your stomach: they’re trying to tell you something important. 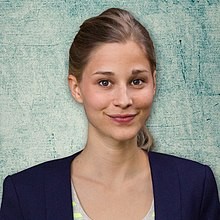 Giulia Enders (born 1990 in Mannheim) is a German writer and scientist whose first book Gut: The Inside Story of Our Body's Most Underrated Organ, has sold more than two million copies in Germany and that was published in English, French (more than one million copies sold), Italian, Spanish, Arabic and other translations in 2015.

The first three sentences of Gut: The Inside Story of Our Body's Most Underrated Organ by Giulia Enders are,

I WAS BORN BY cesarean section and could not be breast-fed. That makes me a perfect poster child for the intractability of the gastrointestinal tract in the twenty-first century. If I had known more about the gut back then, I could have placed bets on what illnesses I would contract later in life.

I also appreciated the youthfulness of Giulia Enders who was born in 1990. Her writing style seemed young to me but in a good way. And her enthusiasm as a young researcher in a relatively unexplored field shone through throughout the book.

The influence of the gut on our health and well-being is one of the new lines of research in modern medicine.

I have read hundreds of books in my lifetime and there are some themes that will always remain important. But I have grown weary of some of them. In contrast, I found it refreshing to read a book on a subject about which I knew very little.

Enders states the purpose of her book which she unquestionably achieved.

I can’t offer any panaceas, and keeping your gut healthy is not a miracle cure for everything, but what I can do is to show, in an entertaining way, why the gut is so fascinating, what exciting new research is currently underway, and how we can use this new knowledge to improve our daily lives.

Gut answered one question that I have wondered about from time to time. I had my tonsils removed when I was a young boy, a common practice at that time. But no harm was done as tonsils are significant only in the very early years of life.

And I have not had my appendix removed.

…a healthy appendix acts as a storehouse of all the best, most helpful bacteria. This was discovered by American researchers Randal Bollinger and William Parker in 2007.

Like most of my generation, I somehow absorbed the idea that the appendix is useless. So I was surprised to learn that this assumption has been proven incorrect. And I was surprised by the late date of this discovery.

Gut helped me appreciate even more how fortunate I am in many ways. I do not suffer from allergies. There are almost no foods that I cannot tolerate. I live in a retirement community in which the need for a gluten free diet seems relatively high. It seems that many people here are intolerant of some particular food, but not I.

I paid attention to the section in the book about reflux. It has been only a rare problem for me and I hope it stays that way. It has been a significant challenge for my mother.

For me, the most interesting section of Gut was The Brain and the Gut.

We humans are very proud of our particularly complex brains… [The gut is] the organ that is currently forcing researchers to rethink. Scientists are cautiously beginning to question the view that the brain is the sole and absolute ruler over the body. The gut not only possesses an unimaginable number of nerves, those nerves are also unimaginably different from those of the rest of the body.

Any neuroscientists reading this will be up in arms when I roughly define the responsibilities of these brain regions as, respectively, self-awareness, emotion, morality, fear, memory, and motivation. This does not mean that our guts control our moral thinking, but it allows for the possibility that the gut might have a certain influence on it… The gut, by contrast, is a huge matrix, sensing our inner life and working on the subconscious mind.

Also very interesting was learning about the microbes inside us.

Looking closer at human beings, it becomes clear that each of us is a world of our own …our gut is the most amazing giant forest ever, populated by the weirdest of creatures. Just as we humans occupy the planet, our bodies are occupied by a population that reveals itself only under the microscope—bacteria… about 100 trillion bacteria.

This is all the more interesting when we realize that each person’s inner world is unique to him or her… Identical twins share the same genes, but they do not have the same bacterial mix.

My wife and I have essentially the same diets. But our blood tests yield different results. It is very probable that we have different bacteria in our guts and that the difference is significant.

The book covered an important fact that I was already aware of.

I was also aware of potential serious consequences from the overuse and abuse of antibiotics, a developing story which is worthy of a whole book.

The senseless use of antibiotics does, however, kill many helpful bacteria, which can be harmful in itself… Antibiotics can alter our gut flora significantly.

Gut is comprehensive and nothing is left to the imagination. Pooping, vomiting, constipation, diarrhea and parasites are all discussed. Fortunately, none of these have been major afflictions for me.

The book was published originally in German in 2015 and in English in 2018. The final section of the book focuses on recent new discoveries on the brain-gut connection. There is much more to learn and there is another book to be written by Giulia Enders in the not-to-distant future.

Finally, as a Canadian, I noticed something interesting on the copyright page. I assume that Canada deserves some credit for the translation of this book into English. This very successful book has also been translated into several other languages.

We gratefully acknowledge the support of the Canada Council for the Arts, the British Columbia Arts Council, the Province of British Columbia through the Book Publishing Tax Credit, and the Government of Canada for our publishing activities.